Women’s agenda dominated conversations in the election ecosystem on Twitter between 13th and 20th September shaking the candidates position in the weekly relevance and visibility (R&V) ranking prepared by AJA Solutions. For the first time since the research about the election on social media by AJA was launched, all women candidates for vice-president – from PT, PDT, PSOL and PSDB – strongly contributed to the share of R&V of their tickets on Twitter. Marina Silva (Rede), only woman running for president, saw her share of R&V go up again after falling for three consecutive weeks. Marina jumped from 7th to 4th place in the ranking, thanks to her tweets about pro women’s causes, according to metrics from the research conducted by AJA. 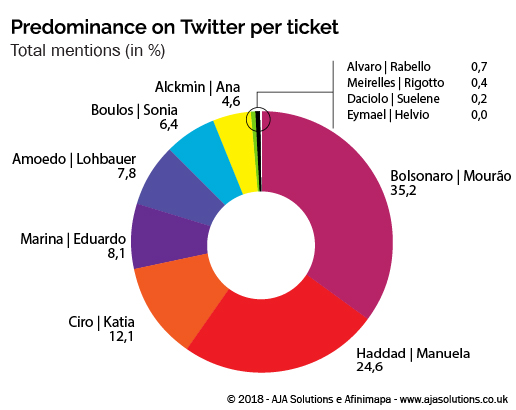 In the weekly battle of hashtags, the women’s movement against Jair Bolsonaro, that began with a group on Facebook, managed to defeat coordinated activity by his campaign on Twitter. Hashtags against him – #elenão, #elenao #elenunca) garnered 2.3 thousand more points in the relevance metrics than those obtained by hashtag #elesim, created by Bolsonaro’s supporters to encounter the women’s movement.

PT’s ticket, Fernando Haddad-Manuela D’Ávila, was the one to benefit the most during the week when women pushed their agenda. Its share in the R&V of the candidates increased by 12 percentage points, reaching 2nd place, as it was propelled particularly by Manuela’s communication and her history of defending women’s agenda. Her performance contributed to almost ⅔ of their ticket’s share of R&V in the week.

Haddad and Manuela were also propelled by former president Lula’s profile on Twitter, who remains as a strong canvasser for PT’s ticket on Twitter. @LulaOficial relevance is still high, placing him above that of nine presidential candidates. Haddad increased its share of R&V by 80 % since the previous week before, when he was confirmed as PT candidate.

The ticket Jair Bolsonaro-General Mourão remained in 1st place in the ranking, despite a fall by 4pp of their share of relevance compared to what they had before Bolsonaro was attacked with a knife in the beginning of the month. The ticket also attracted negative relevance due to criticism by General Mourão against families lead by women – for saying “famílies lead by mothers and grandmothers are a factory of misfits.” It also attracted negativity after a group of women against Bolsonaro – #mulherescontrabolsonaro – on Facebook was hacked  by people claiming to be Bolsonaro’s supporters who also allegedly threatened the women administrators of the group.

Bolsonaro’s campaign responded quickly: it promoted a group supporting him on Facebook – #mulherescombolsonaro – and started posting women’s testimonies and supporting tweets in order to contain the damage, yet it fell short of  condemning the hacking. It garnered positive relevance, however, reaping the first results from a change in strategy to disentangle his image from the harshly speaking tough guy that has dominated his campaign until he was attacked with a knife.

In 4th place in this week’s ranking, PDT ticket, Ciro Gomes-Kátia Abreu, that suffered a strong loss of relevance, confirming the great volatility in social networks. Their share of R&V fell by 16 percentage points between 7th to 13th September after gaining 20pp the week before.

Their fall was mainly the result from a decrease in his share of spontaneous media, and was partly offset by the contribution of women. A group of tweets by senator Kátia Abreu, criticising General Mourão’s statement about women as well as a tweet by actress Patricia Pillar, Ciro’s former wife, in support of his candidacy propelled the ticket’s performance.

Among those candidates with a better performance in opinion polls, PSDB’s ticket, Geraldo Alckmin-Ana Amélia Lemos, came 7th, despite a small fall of 1pp in their share of R&V. Their difficulty is that both are still attracting negative sentiment when their tweets reach higher resonance. This week, Ana Amélia contributed to the positive relevance of their ticket with a tweet about the cyber attack against the group #mulherescontrabolsonaro, which received a negative comment by Paulo Guedes, an economist and one of Bolsonaro’s main advisors.

Among the paper candidates (nanicos in Brazil), Partido Novo’ ticket, João Amoêdo-Christian Lohbauer, came 5th in the ranking, despite a decreasing share in the R&V confirming a trend that started in the beginning of September. In 6th place, PSOL ticket, Guilherme Boulos-Sonia Guajajara, also lost relevance and kept a declining trend. That said, it received a significant boost from Sonia, thanks to her tweet urging women to defeat Bolsonaro.

This week 3,586,639  interactions among 1,497,392 users were analysed by AJA in the election ecosystem on Twitter. The interactive version of both maps of relevance and visibility and of influence and affinity of the pre-candidates reveal mistakes, hits and the ways of increasing relevance on social media.

For further information on our weekly reports, please click here 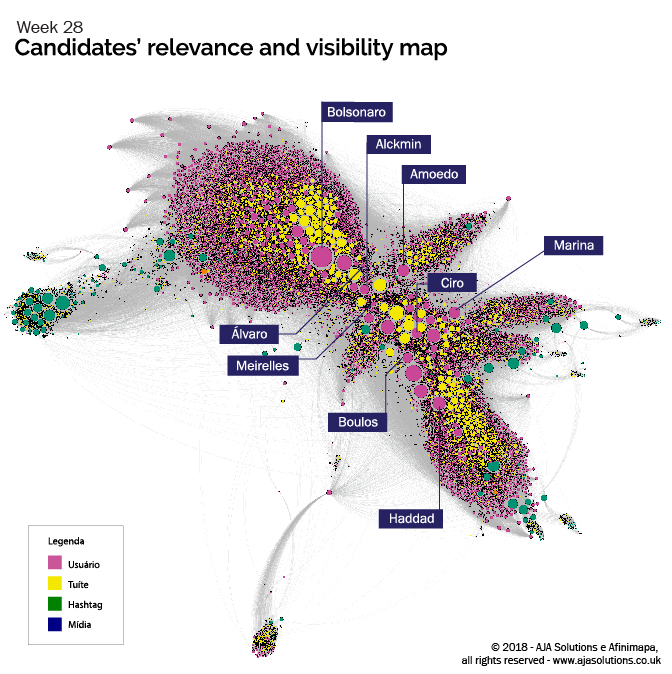 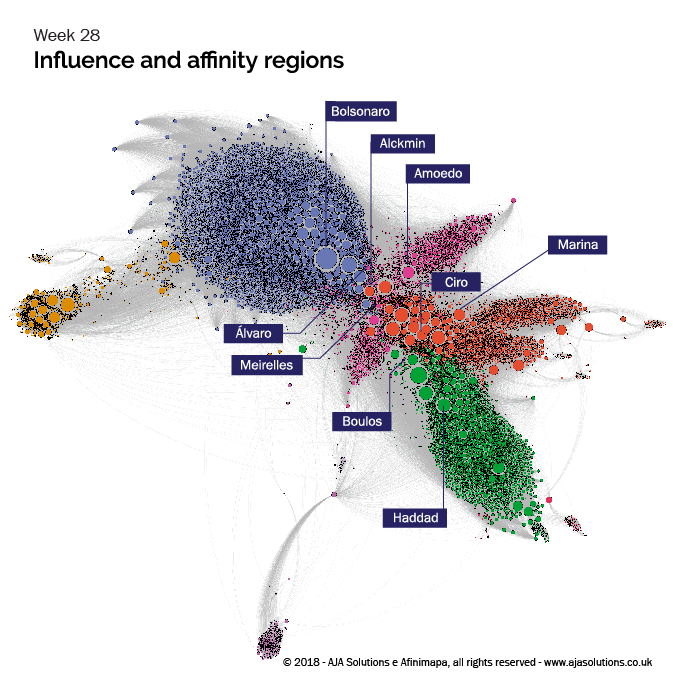